Atkins, a member of the SNC-Lavalin Group, is one of the world’s most respected design, engineering, and project management consultancies; they are the United Kingdom’s largest engineering consultancy and one of the leading design firms in the world. The company was the official design and engineering services provider for the 2012 Olympic Games in London. A LoadSpring client since 2016, their ever-growing business recently gave rise to the need to expand cloud services even further.

Global Cloud Coverage: The company’s cloud computing needs originated in the United States, but over time, spread across North America, the UK, and the Middle East. This geographic spread meant that not only was there a variety of software needed and utilized in various locations but also that there were latency issues in hosted software in the ex-US locations. Cost breakdown structures were distinct in each country, which didn’t allow for global data rollup.

LoadSpring proposed a multi-cloud, Global Cloud solution, with data centers in North America and the UK. The regional clouds enhanced application performance, which in turn increased enterprise-level efficiency. LoadSpring’s custom cloud services also enabled single sign-on to all applications and allowed administrators to provision, assign, and report on users from a global level.

Atkins quickly took advantage of the evaluation, and LoadSpring migrated the entire company to the new software package, iTWO costX®, rapidly with zero downtime. All data from the previous application integrated seamlessly and was immediately available to users. LoadSpring’s cloud-hosted software expertise provided time to value in testing and rapid deployment; the migration to new software also supported continuous business intelligence by the careful merging and integrating of data between the old and new applications. 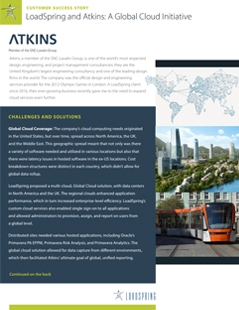 Our real, live experts can help you navigate our Cloud Project Management platform and make your job faster, easier and more efficient.