Atos and Siemens: A Win-Win Situation with LoadSpring

Atos is a European multinational IT company headquartered in France, with offices worldwide. They provide global IT support to Siemens. Siemens is a German multinational conglomerate company, with divisions in energy, healthcare, infrastructure, and manufacturing. The two companies are in a self-described strategic alliance; Siemens recently purchased roughly 15% of Atos stock to reinforce the relationship.

Measurable Increase in Performance: Atos initially came to LoadSpring seeking help supporting Primavera P6 for Siemens. Project managers at Siemens Gas and Power were experiencing sluggish software performance. Once P6 was hosted on LoadSpring Cloud Platform, the PMs saw an immediate improvement in performance. Impressed by these reports, Siemens ran performance testing comparing LoadSpring Cloud Platform hosted P6 to its locally hosted version. LoadSpring’ hosted P6 averaged 10x faster than Siemens’ locally hosted version, based on a series of commonly performed tasks. This performance increase saved over an hour of wait time per user per week. At 17 staff-hour savings each week, the move to LoadSpring Cloud Platform paid for itself. The increase in project efficiency and reduction in frustration added even higher value to that equation.

Feeding and Watering of P6: Another barrier to overcome was the day-to-day maintenance, upkeep, and administration of P6. A planner at Siemens was spending most of his time performing this nearly full-time job. This misappropriation of expertise was alleviated by moving P6 to LoadSpring Cloud Platform. Updating, maintenance, data storage, and other critical tasks were offloaded completely to LoadSpring, which in turn put the planner back to work in his intended role, helping Siemens projects get back on track. Keeping project managers on task rather than struggling with software provides almost incalculable value

Legendary Customer Support: LoadSpring’s legendary customer support provided the finishing touches to the package. Siemens’ project management group had difficulty with unresponsive technical support for P6. LoadSpring’s expertise in P6 afforded a turnkey solution for Atos, relieving significant IT burden, and further allowing the planners at Siemens to focus on their jobs rather than waiting for help on open support tickets.

Moving Forward: Relief of IT and support burdens, combined with a significant performance boost, created a substantial amount of value for Atos and Siemens. This value will increase over time as efficiencies in projects improve, and there is likely room for expanded business between all parties 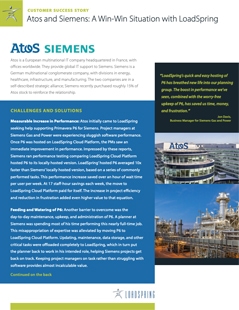 “LoadSpring’s quick and easy hosting of P6 has breathed new life into our planning group. The boost in performance we’ve seen, combined with the worry-free upkeep of P6, has saved us time, money, and frustration.”

Our real, live experts can help you navigate our Cloud Project Management platform and make your job faster, easier and more efficient.